The Landsgemeinde is the gathering of the electorates of Canton Glarus and it is the highest legislative body of the canton. Some elections take place here; first the Governor, the most senior official of the canton and his deputy are elected from the council of 5 senior executive officers already voted into office by ballot, followed by the judges and the public prosecutor. Above all the Landsgemeinde is responsible for passing the constitutional and the legislative laws, for the fixing of the tax rate and for making decisions on functional issues. 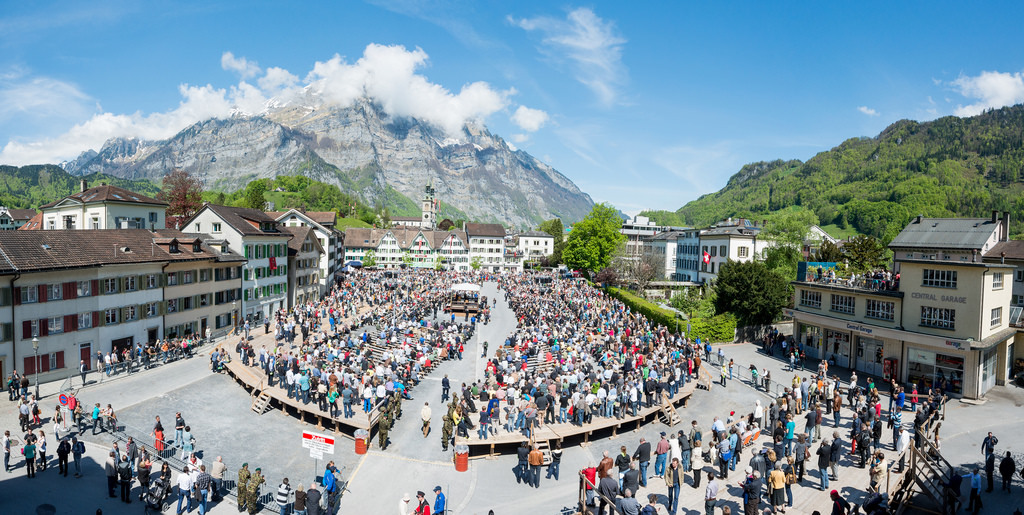 Every electorate has the right to support a motion, to suggest an amendment, to reject or postpone a motion or send it back for reviewal. This characteristic marks the difference between the Glarner Landsgemeinde and other Landsgemeinden and ballot elections, where the electorates can only vote for or against a motion and are unable to have any direct influence on the local politics. Every person with the right to vote can at any time put forward a motion to the Landsgemeinde without having to previously collect signatures.

The Landsgemeinde takes place in the open air on the first Sunday in May on the Zaunplatz in Glarus. There are stands reserved for interested spectators. The Landsgemeinde is conducted by the Governor, the senior official of the canton who leans on his sword during the discussions. He starts the proceedings with a speech and then goes on to swear-in the electorates. The agenda together with a briefing is distributed to every household in which at least one electorate lives in the form of a brochure. The information in the briefing is based on the discussions which have taken place at the county council meetings. Furthermore the budget and the balance sheet of the canton are presented in the brochure.

People have been provided with coloured voting cards which they must raise in the air to cast their vote. The Governor makes an estimate on the majority. If he is doubtful he can consult the other 4 members of the Government but his decision is definite and incontestable.